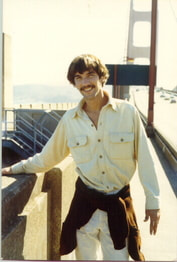 
My brother Allen was just 22 months older than myself. Our Mother said we were like twins, if he got a cookie then I must get a cookie, if I got a glass of milk, he was there waiting for his. She told us, when we were about 4 and 2 years old we would come into the room, look at her and take off in different directions - she never knew who she should follow. In the mid 60's we lived in Lafayette Ca. for 2 years, during that time 'pegged leg' jeans were the fashion, you had to 'peg' them yourself. Allen 'pegged' his jeans one night and the next morning he put on the jeans, he zipped them up and took a step, well he tried to take a step. He ended up on his bed yelling for Mom. Mom had to drive us to Jr. High since it took her about a half an hour to cut him out of his new jeans. He was not happy with me because I keep laughing at him. Allen came to an Halloween party at our house in Newark, his costume - cameo - done with his oil paints. We had a blast that night, all the kids could not believe someone would paint themselves like that. I can still see the kids gathered around him. In a nut shell, Allen was a very special person, if you were someone he loved - you knew you were loved ! There are so many memories but there is not enough room on the net to write them all. Think of those who are gone, and try to be the person they brought out in you.


I met Allen through a mutual Friend that also went to Alameda High School
named 'Bob Ortez'. I think we all had lunch over Bob's house one day on Buena Vista
Avenue. We were not all alike and we liked it that way. There were many
discussions during the later years in High School. Bob had this 'dry' kind of
humor that I always found very funny, he made us laugh a lot. Al was forever
adjusting his personality, I guess he was always trying to find out who he was.
We would usually hang out at Bob's but we would end up at Al's house.
When I looked over at Allen when he was painting it was like he
was in a trance. Digging into the painting with his mind trying to paste together
the painting. He would be glopping paints together to get the right shades and
then using the right brush to paint on just the right detail. He actually didn't
care much if by the end of the night he had paint all over himself.
Occasionally he'd say Let's take a break. He roll a cigarette in that manner of his
and push it into his mouth - make that smiling gesture and then light it.

We talked about almost anything that we could get our minds on
and we expounded back and forth on those issues. He'd always have some idea
like: One night he said 'I painted this painting for Van Morrison' let's go find his
house in San Anselmo and drop it off. Or he'd say "Van Morrison is playing at
a small place, let's go!". His Mom would do that thing of hers 'Oh Allen you have
such grand ideas'. I liked her a lot. She never ever gave me any problems and
didn't mind me hanging around (leastwise I don't think she did).
One thing Allen was keen on was if you did not speak the truth to him he
didn't like that very much. He would at times look at me and say "Tom,
I'm really sleepy so if I go to sleep just let yourself out". I didn't mind that much.

Then there was the Quincy thing. He drove with us up to Quincy once to 'the cabin'
where everyone was working on something to fix it up. Bob and I went up there
to meet with him once or twice and he introduced us to Jessie I think was her name.
We went out on the town with them. We noticed that Allen was consumed with
Jessie and almost ignored Bob and I during our stay. We went on some hay rides
up there. I don't remember about those trips too much. I don't think in all the years
I knew Allen we had a fight.

When we Graduated Al got to go to school up in the Feather River district way up
in the mountains. I remember the long rides from the Bay Area up to 'The
Cabin' where on occasion we would drive up there in the old cars we fixed up.
Those rides Bob drove mostly - he loved to drive. We'd end up at the Cabin
but I don't remember the inside of the cabin too much. I remember the town
a little bit. I remember going on a Hay Ride or some kind of country dance
up there. There was one time Al and I went driving around the town
and we ended up in this restaurant. There it was 'A Piano' in the restaurant and
Al just couldn't resist. Actually when he wanted to play the Classical Music he
could do that but that wasn't Al's style soon he would veer off into a jazzy
tune and have some folks gathering around the piano.

The late evenings is what sticks in my mind. I'd show up there kind of late at
night and Al would say "Let's cook up something and boil up some Tea". And while he
was toiling over the stove he put is leg up on the side of the other leg and ask
me 'So how was your day?'. He loved to ride in any convertible that I ended
up with like my triumph spitfire. One day I picked him up from the Hospital and
he said "What a Great Car" and at the first stop sign he put his hand out and
touched the road. He loved having the wind whip through his hair.
So I'd watch him set up his paintings near the kitchen towards the back of the
house. To the untrained observer it looked always like it was a mess - mostly
to me at first because I definitely was not a painter. He would usually sketch
in pencil what he wanted to do on the canvas. He would have this infinite amount
of little paint tubes in a pile and then he would start to mix them together and
get the exact shade he wanted and take the brush and put the paint onto the
canvas. I could never see the colors he could see or how the painting came
together like he could. When he was painting he would never ever be concerned
if he got some paint on his 'self' or his clothes. And in the morning he would say
'Time to clean up, I'm going to take a shower'. In the background of the house
was his younger sister Janis (with the cute smile) about 5 years younger than us,
they seemed to be very close. Also there was another Sister Doris. Doris was
the one always trying to bring Allen down to earth. She probably did not know
that he couldn't be brought down to earth. He liked being in a dream world filled
with exotic things. Al at a moments notice would say "Let's take your car to the
Ocean and smell the air". Along the way we'd stop along the highway and he'd break
out his sketch pad and sketch a little something and at night I'd watch him
paint what he saw that day.

Yes he tried and tried to get me to paint - He'd say "anybody can do water
colors!" and hand me the brush I make a valiant effort but then I would revert to
my guitar playing instead. Something I was learning and I wanted to be good at.
We both were crazy about Van Morrison, we'd analyze and listen to his vinyl
records over and over. He even painted a special painting for Van and said
let's drive up to San Anselmo and deliver it. We tried to attend many of Van's
Bay Area gigs and we always liked what we would hear that evening. Van
sculpted our lives during those days.
He always was looking out for me - He'd give me the coat off his back if he
thought I was cold. We'd walk endlessly around Alameda in the rain, with our
Overalls and talk about whatever was on our minds. Al never had a bad thing
to say to me, both Al and Bob were the Best Buddies I ever knew.

Dear Al,
Thank You so much for a part of my Life that was full of wonder and amazement.
Just recently seeing your Photo brought tears to my eyes because we miss you
more than ever. Watch over us and keep that amazement forever burning in our
hearts.